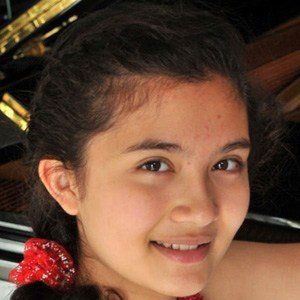 Classical musician who achieved much acclaim and many awards after taking up piano when she was four-and-a-half.

She was a pre-college student at The Juilliard School, being taught by famed pianist and instructor Yoheved Kaplinsky.

She appeared on NPR's From the Top radio program for the first time in 2012, the same year she debuted at the Newport Music Festival.

She was born into a Lebanese-Japanese family and became fluent in both English and Japanese.

She played Ludwig van Beethoven's Piano Concerto No. 2 for her orchestral debut with the Boston Neo-politan Chamber Orchestra in 2011.

Nadia Azzi Is A Member Of