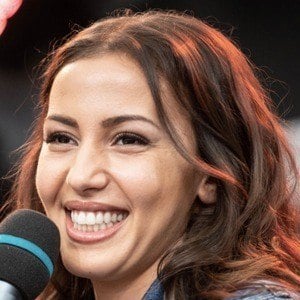 Most Popular#36010
Born in Frankfurt, Germany#16
Rapper Born in Germany#19

Also known by the stage name Hän Violet, she is hip hop and pop singer whose music leans towards the German hip hop scene. She released a debut album in 2015 called Nador which charted in Germany, Austria, and Switzerland.

As Hän Violet, she released a project called Flow zum Gesang in 2013.

She entered into the Bundesvision Song Contest 2015 with a specially edited version of the song "Hellwach." She also competed at the New Music Awards that same year.

She grew up in Frankfurt am Main. Her grandparents are from Morocco.

She had worked with the German producing team Beatgees, a group who had also previously worked with Ann Sophie.

Most Popular#36010
Born in Frankfurt, Germany#16
Rapper Born in Germany#19

Namika Is A Member Of