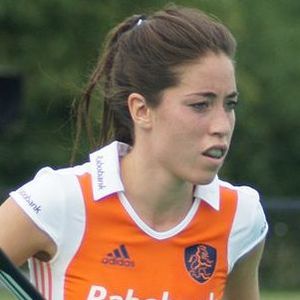 Midfield/forward who is widely known for her international career playing for the Dutch team. She earned a gold medal in field hockey at the 2008 and 2012 Summer Olympics.

She made her professional field hockey debut in 1999. She first signed with club HDM.

She finished her international playing career as a member of the Dutch national team at the 2016 Summer Olympics. She earned a silver medal after losing in a shoot-out to Great Britain.

She was born and raised in The Hague, Netherlands.

She has been the long-time girlfriend of speed skater Sven Kramer.

Naomi Van As Is A Member Of