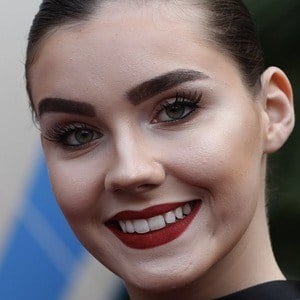 Model most well known as a competitor on the ninth season of Germany's Next Top Model hosted by Heidi Klum. She then went on to appear on I'm a Celebrity - Get Me Out of Here!

She was living in Soltau when she auditioned for the Germany's Next Top Model talent competition.

She hosts the regional television series Nathalie's World on Hamburg 1.

Her father was an entrepreneur and her mother was a Russian mathematics teacher who was also a model in her youth. She has an older brother.

In 2014, she competed against model and Instagram sensation Stefanie Giesinger on Germany's Next Top Model.

Nathalie Volk Is A Member Of