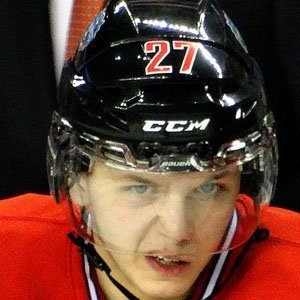 Hockey player who was taken by the Montreal Canadiens in the first round of the 2014 NHL Draft. He was invited to play in 2014 CHL Top Prospects Game following an outstanding season with the Saskatoon Blades. He was traded from the Blades to the Everett Silvertips in September 2014.

He was born in Moscow and played junior hockey with Kapitan Stupino in the Russian Junior Hockey League.

He led all Western Hockey League rookies in goals, points and assists for the 2013–14 season.

He has a sister named Anastasia.

He and Mike Green both played for the Saskatoon Blades in the Western Hockey League.

Nikita Scherbak Is A Member Of