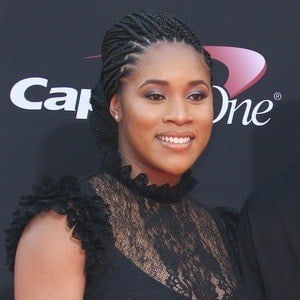 Former basketball player for the UCLA Bruins who married star NBA point guard Russell Westbrook in 2015. She is extremely popular on Instagram with over 290,000 followers.

During her high school basketball career at Diamond Ranch, she led her team to a 2006 CIF 3AA championship and to the 2007 CIF title game where she scored 35 points. She earned two CIF Player of the Year honors and was a three-time league MVP.

She stayed in school past her UCLA under-graduate days to obtain a Master's in Psychology.

Her maiden name is Earl. She and her three brothers Michael, Jonathan and Benjamin were born to parents Michael Earl and Jennifer Lyons. She is the cousin of former UCLA football star Kenny Easley. She and Westbrook married in August of 2015 and gave birth to a son named Noah in May 2017.

She played basketball for UCLA like Ann Meyers decades before her.

Nina Westbrook Is A Member Of