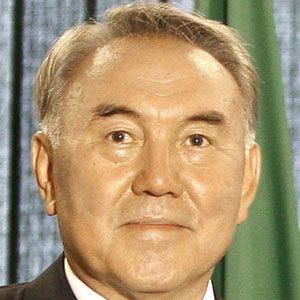 Known for his revolving affiliations with the Communist Party, the Independent Party, and finally, the Nur Otan Party, he took office in 1991 as President of Kazakhstan. During the 1980s, he had served as Prime Minister of the Kazakh Soviet Socialist Republic.

In his late teens and early twenties, he trained as a steelworker. In the early 1960s, he became a member of the Communist Party and was also active in the Young Communist League.

Suspected of wide-ranging corruption, Nazarbayev managed to push through a Kazakhstani constitutional amendment that would allow him to repeatedly be re-elected to the presidency.

His marriage to economic expert and philanthropist Sara Alpysqyzy resulted in three daughters, all of whom pursued careers in either politics or business.

After Joseph Stalin's regime seized the farm on which his father labored, the young Nazarbayev was forced into a nomadic life.

Nursultan Nazarbayev Is A Member Of