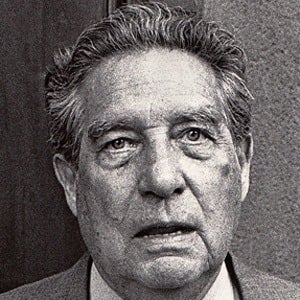 A surrealist and existentialist poet and writer, he was the recipient of the 1990 Nobel Prize in Literature. His best-known works include poetry volumes such as La Estacion Violenta (1956) and Piedra de Sol (1957), as well as the long essay, The Labyrinth of Solitude.

He was introduced to Mexican and European literature by his grandfather. He published his first poetry collection, Luna Silvestre, at the age of nineteen.

He published over twenty poetry collections between 1933 and 1972.

He was the son of Octavio Solorzano and Josefina Lozano. He was, at one point, the lover of Italian artist Bona Tibertelli. He was married to Elena Garro from 1937 to 1959 and Marie-Jose Tramini from 1965 to 1998. He had a daughter named Helena.

He won the Nobel Prize in Literature five years after Claude Simon earned the same honor.

Octavio Paz Is A Member Of