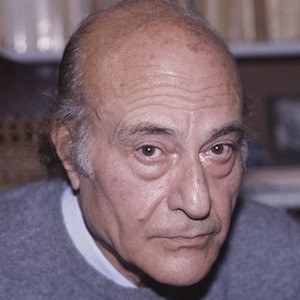 Greek poet and 1979 Nobel Prize in Literature recipient who was associated with the Romantic Modernism movement. His poetic works include Orientations, The Sovereign Sun, and Diary of an Invisible April.

He was born into a family from Lesbos, Greece, and served as a military lieutenant in the late 1930s.

He wrote a poem that was set to music and became a popular Greek anthem.

He studied at the Sorbonne in Paris and became acquainted with Pablo Picasso and other avant-garde artists and literary figures.

Odysseas Elytis Is A Member Of