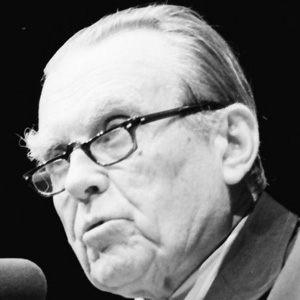 Lithuanian-born Polish poet, author, academic, translator, and recipient of the 1980 Nobel Prize in Literature. His numerous literary works include The Unencompassed Earth (poems), Starting from My Streets (prose), and Facing the River (poems).

His father was a civil engineer. Milosz and his brother, a documentary filmmaker, were raised in the Catholic faith.

He was linguistically gifted and was fluent in Lithuanian, Polish, English, French, and Russian.

He married Janina Dluska in 1944 and had two children. After his first wife's death, he wed American historian Carol Thigpen.

His work was featured in Polish Writers on Writing, a 2007 publication edited by Adam Zagajewski.

Czeslaw Milosz Is A Member Of