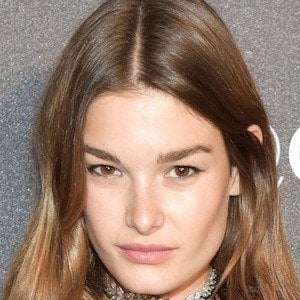 Internationally successful print and runway model who has worked virtually n since her career began to take off in 2013. She is perhaps best known for her runway career, modeling for designers like Caroline Herrera, Balmain, and Marchesa.

One of her earliest modeling credits was in 2012 when she appeared in a spread for The Lab Magazine called Alasdair Designer Spotlight.

She has twice graced the cover of Vogue Italia. The first was in December 2013 and the second was in September 2014.

In April 2016, she celebrated National Siblings Day on Instagram by posting a photo with her brother Corentin.

In 2015, she appeared in the Fall/Winter advertising campaign for H&M Denim with Arthur Gosse.

Ophelie Guillermand Is A Member Of