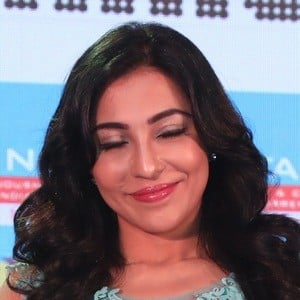 Indian award-winning actress and model known for her work in the South Indian film industry. She is most recognized for her role as Pallavi in the 2013 film Story Kathe as well as her role as Annamma in the Malayalam film Dum in 2016.

Beginning her career as a model, she appeared in commercials and won the pageants Miss Karnataka and Miss Navy Queen in 2010. She then went on to pursue acting, making her debut in the 2012 Malayalam film Poppins. She broke into the mainstream in 2014 with two big-budget Tamil films: Yennai Arindhaal and Uttama Villain.

She has won several awards for her acting including Best Female Debutant at the 2013 South Indian International Movie Awards for her work on Story Kathe. She also won the award for Most Promising Actress at the India Leadership Conclave in 2017 for her work in film.

She was born into a Malayali family in Abu Dhabi, United Arab Emirates but was raised in Pathanamthitta, Kerala, India.

She starred alongside Udhayanidhi Stalin and Namitha Pramod in the 2018 Tamil-language comedy-drama Nimir.

Parvatii Nair Is A Member Of