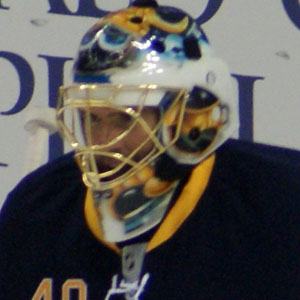 NHL goaltender who debuted with the Pittsburgh Penguins during the 1996-97 season. He set an NHL record for longest unbeaten streak at the start of an NHL career at 16 games. He then went on to play for the Ottawa Senators from 1999 to 2004 and he also spent time with the St. Louis Blues, Chicago Blackhawks and Buffalo Sabres.

He was a sixth round pick of the Pittsburgh Penguins in 1993.

He was known for putting a lot of creativity into his goalie mask: one had cartoon eyes and another was a Marvin the Martian mask.

He married Marie-Helene Lalime in 2004.

He played alongside Daniel Alfredsson on the Ottawa Senators.

Patrick Lalime Is A Member Of