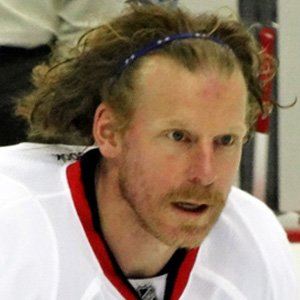 Longtime NHL right winger for the Ottawa Senators who joined the Detroit Red Wings in 2013. He won a gold medal with the Swedish national team at the 2006 Olympics.

He was a sleeper pick in the 1994 NHL Draft and was overlooked by many talent scouts.

He set the Senators' team record for goals, assists, and points during his 1,178-game career with the team.

He fathered four sons with his wife Birgitta.

He was compared to Steve Yzerman because he gave the Senators the kind of long-term leadership Yzerman brought to the Red Wings.

Daniel Alfredsson Is A Member Of