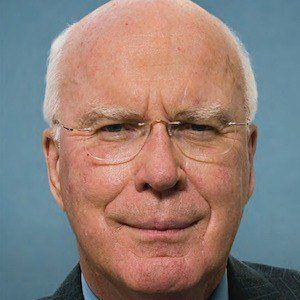 Senior United States Senator for more than four decades who would also serve as the President pro tempore of the United States Senate as a member of the Democratic Party. As the former chairman of the Senate Judiciary Committee, he helped pass the Justice Safety Valve Act of 2013, The Smarter Sentencing Act of 2013, and the Public Safety Enhancement Act.

He graduated from Georgetown University Law Center where he received his Juris Doctor after attending Saint Michael's College.

He is an avid fan of Batman and wrote the foreword to The Dark Knight Archives, Volume 1, the preface essay for Batman: Death of Innocents and the introduction to Green Arrow: the Archer's Quest. He has made cameo appearances in several Batman films including The Dark Knight, Batman & Robin and Batman Forever.

His mother's name was Alba, and his father Howard Francis Leahy worked as a printer. In 1962, he married Marcelle Pomerleau with whom he has three children.

He served alongside presidential candidate Bernie Sanders as a US Senator.

Patrick Leahy Is A Member Of