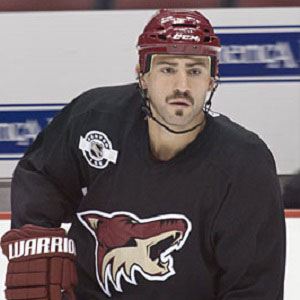 Charismatic hockey player nicknamed "Biznasty" known for his time with Pittsburgh Penguins and Phoenix Coyotes. He won a gold medal representing his native Canada at the IIHF Under-18 Championships in 2003.

He was drafted by the North Bay Centennials of the Ontario Hockey League when he was sixteen years old.

He has attracted more than 570,000 Twitter followers due to his highly-entertaining tweets under the handle BizNasty2point0.

His father was a steel worker and his mother was a professor at Niagara College.

He fought Jody Shelley of the San Jose Sharks during an October 12, 2009 game while playing for the Coyotes.

Paul Bissonnette Is A Member Of