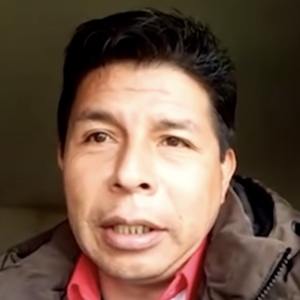 Peruvian leftist politician who has gained fame as Free Peru's candidate in Peru's 2021 Presidential Election. He came in first place in the first round of polling with 18 percent of the votes and advanced to the second round of voting.

He has worked as a primary school teacher and teacher union leader. He gained popularity when he led the teacher's union strike in 2017. In 2002, he unsuccessfully ran to be mayor of the Anguía District in the Chota province of the Cajamarca Region of Peru.

He decided to run for president after attempting to teach students during the COVID-19 lockdown, but found it difficult in his impoverished region. After the first round of voting in the 2021 general election, he held a rally in the historic part of Lima where he rode in on horseback.

He is the son of two illiterate, low-class parents. He is one of nine children. He is married to Lilia Paredes and they have three children.

He has had mixed things to say about the Venezuelan president Nicolás Maduro.

Pedro Castillo Is A Member Of