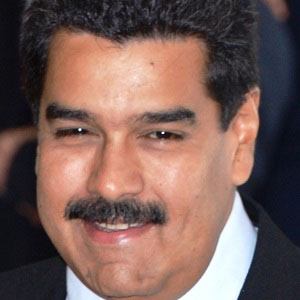 Socialist politician who became Vice President of Venezuela in 2012 and President of the country in 2013. In 2016, the country launched a movement toward recalling Maduro in favor of a new leader.

He worked as a bus driver for many years and began his political career by acting as a union representative for bus drivers in Caracas.

He was the Speaker of the National Assembly before becoming the Minister of Foreign Affairs in 2006.

He married Cilia Flores in 2013 and he has a son named Nicolás.

He succeeded Hugo Chavez as President of Venezuela.

Nicolás Maduro Is A Member Of