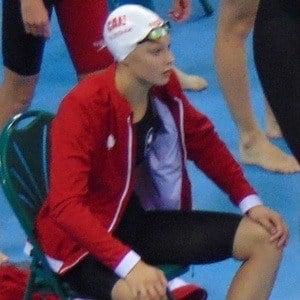 Canadian swimmer specializing in freestyle and butterfly who competed at the 2016 Summer Olympics. She became the first Canadian to win four medals at the same Olympic games, with a gold in the 100 meter freestyle, a silver in the 100 meter butterfly, and two bronzes in the women's freestyle relays.

She was encouraged to take up swimming by her father and learned to swim at a neighbor's pool. She took up the sport competitively at the age of 9.

She became Canada's youngest Olympic champion at the age of 16 in the 2016 Summer Olympics.

She is the youngest of five siblings. She and her siblings all come from an athletic background, including her brother Jamie who is in the NHL.

She tied swimmer Simone Manuel for the Olympic record in the 100 meter freestyle at the 2016 Olympics.

Penny Oleksiak Is A Member Of