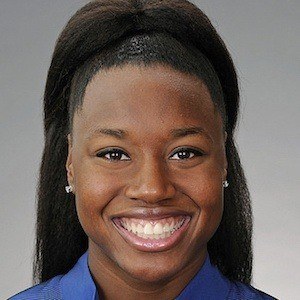 Became the first African-American woman to win an Olympic gold medal in an individual swimming competition when she took gold in the 100 meter freestyle, setting an Olympic record of 52.70 along with fellow first place finisher Penny Oleksiak in the process. She also took gold in the 4x100 meter medley relay at the 2016 Olympics.

She began swimming when she was five years old. After graduating from Austin High School, she went on to Stanford University, where she joined the Stanford Cardinal women's swimming team.

She first tried out for the Olympic team in 2012. She went to the World Championships in Barcelona in 2013, where she was part of the US team that won the gold medal in the freestyle relay.

She has two older brothers named Chris and Ryan who got into swimming before her. She joined swim classes because she admired them.

Simone Manuel Is A Member Of