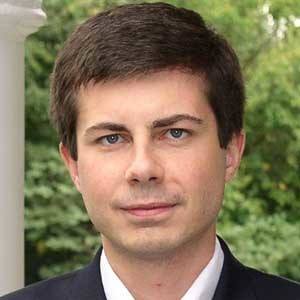 United States politician who is known for having served as the 32nd Mayor of South Bend, Indiana. He gained attention in 2019 when he announced his run for Presidency during the 2020 election. He is a member of the Democratic party and is a veteran known for having served a tour in Afghanistan and as a Naval Intelligence Officer. He became the United States Secretary of Transportation in 2021.

He graduated from Harvard University and Oxford University. After graduating, he worked for the strategy consulting firm McKinsey and Company. He then served as an intelligence officer in the Navy Reserve from 2009 until 2017. He was first elected mayor of South Bend in 2011.

He is known for having won the GovFresh's Mayor of the Year award in 2013. He is also a devout Christian.

In December of 2017, he announced his engagement to Chasten Glezman after the couple had met in 2015 on the dating app Hinge. They were married in a private ceremony at the Cathedral of St. James in June of 2018. The couple announced the adoption of their two children in September 2021.

In 2013, he performed with the South Bend Symphony Orchestra as a guest piano soloist alongside Ben Folds.

Pete Buttigieg Is A Member Of