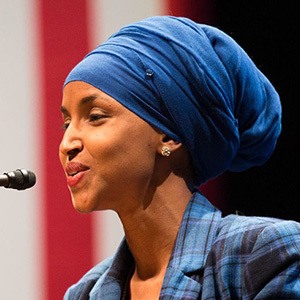 Politician who became one of the US' first Muslim women elected to the US House of Representatives with her win in the 2018 midterm elections. She was also the first ever Muslim refugee elected to Congress, and Minnesota's first non-white woman representative.

She fled Somalia with her family following the outbreak of the country's civil war in 1991. She later earned her bachelor's degree in international studies and political science from North Dakota State University.

She was elected as a Democratic-Farmer-Labor member to the Minnesota House of Representatives in 2016, and became the first ever Somali-American legislator in US history. She was named as part of Time Magazine's list of "Firsts: Women who are changing the world" in 2017.

She is the youngest of seven children. She and her husband Ahmed share three children.

She was photographed by Annie Leibovitz for Vogue Magazine's February 2018 feature "5 Families Who Are Changing The World as We Know It."

Ilhan Omar Is A Member Of