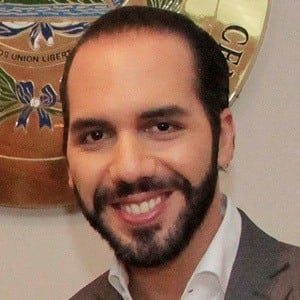 Businessman and politician who is known for having been the President elect of El Salvador after winning the 2019 election. He is best recognized for making history by winning the presidency while being a member of the GANA party, a group outside the two main political parties of El Salvador.

He first started running his own company at the age of 18. He eventually worked as the owner of Yamaha Motors El Salvador. His career in politics started in March of 2012 when he was elected mayor of Nuevo Cuscatlan.

In February of 2017, he visited the city of Taipei where he met with Taiwanese President Tsai Ing-Wen. In June 2019, he jokingly named popular Spanish influencer AuronPlay "Minister of YouTube" through a tweet.

He married Gabriela Rodriguez de Bukele in 2014. In August 2019, they welcomed their first child together, a daughter named Layla.

In March 2020, he was interviewed via Instagram live by music artist Residente about his government's response to the COVID-19 pandemic.

Nayib Bukele Is A Member Of