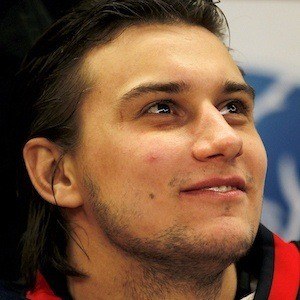 Czech hockey goalie who became a member of the Detroit Red Wings. He split time with Jimmy Howard early in his career, but started to wrestle the starting job from him during the 2015-2016 season. The year before, Mrazek had been named the team's Rookie of the Year.

He was a fifth round pick of the Red Wings in the 2010 NHL Draft after only one year in the Ontario Hockey League. However, he would remain in the OHL for two more seasons before making his NHL debut in 2012-2013.

His first appearance in the Stanley Cup Playoffs came in April of 2015 against the Tampa Bay Lightning. He had two shutouts in the series, becoming just the third Red Wings rookie to accomplish the feat, although the team was ultimately eliminated in seven games.

He grew up in Ostrava, the third-largest city in the Czech Republic, and played in the Czech Extraliga before joining the OHL.

He was drafted the same year as future Red Wings teammate Riley Sheahan.

Petr Mrazek Is A Member Of