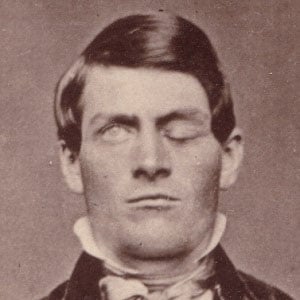 After suffering frontal lobe damage as the result of a railway construction accident in which a long, metal rod completely pierced his skull, brain, and face, Gage spurred discussion within the fields of neurology and psychology about the role of different areas of the brain in determining personality.

His famous accident occurred in September of 1848, while he was helping to build a Vermont track of the Rutland & Burling­ton Railroad. Previously, he had worked on the Hudson River Railroad in New York.

Following his accident and subsequent (partial) recovery, Gage briefly became the living subject of an exhibit at New York's Barnum's American Museum. He later relocated to Chile, where he worked as a stagecoach driver.

The children of Hannah Trussell and Jesse Gage, he and his four younger siblings grew up in Grafton County, New Hampshire.

He and Shoeless Joe novelist W.P. Kinsella both suffered mishaps that resulted in head injuries.

Phineas Gage Is A Member Of