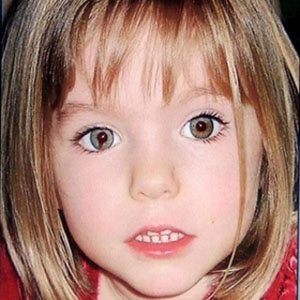 British child who disappeared in 2007 while on vacation with her family in Portugal. Her case has been considered one of the most heavily reported missing-person cases in modern history.

She and her siblings were born in Leicester, England.

An eight-part Netflix series focusing on her case, called The Disappearance of Madeleine McCann, was released in March 2019.

Her parents, Gerry and Kate McCann, left her asleep in her bed at a Portuguese resort hotel while they dined at the hotel's restaurant. They repeatedly checked on Madeleine and discovered around 10 pm that she was missing. Her twin siblings, Sean and Amelie, were two years old and sleeping in the same bedroom when she disappeared.

Following Madeleine's kidnapping, the McCanns were subjected to a British media circus reminiscent of that surrounding the death of Princess Diana. They were awarded damages in 2008 for the exploitation of their family by the press.

Madeleine McCann Is A Member Of