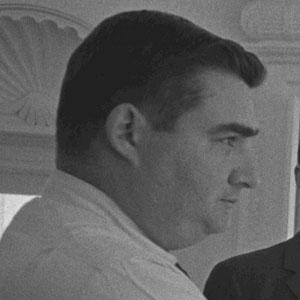 White House Press Secretary to U.S. Presidents John F. Kennedy and Lyndon B. Johnson who later became known for his work as an ABC News correspondent. He was one of the managers of Robert F. Kennedy's 1968 presidential campaign and was only several feet away from the Senator when he was assassinated in the kitchen of the Ambassador Hotel.

He appeared in a third season episode of Batman, "The Joke's on Catwoman," where he played "Lucky Pierre," an unscrupulous lawyer who defends Catwoman and The Joker in a trial.

His grandfather was Pierre Bietry, a pioneer of the Yellow socialism movement.

He was the White House Press Secretary for Lyndon B. Johnson.

Pierre Salinger Is A Member Of