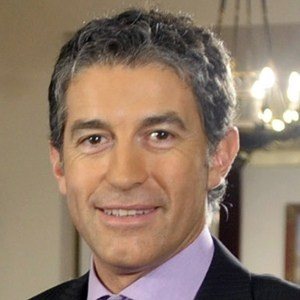 Chilean journalist and television presenter who is known for his work on the Channel 13 and Radio Duna networks. He is known for appearing on the programs En boca de todos and Teletrece AM.

He studied journalism at the Catholic University of Chile. He then went on to work for the newspaper El Mercurio as a reporter specializing in Economy and Business. He then worked as a television critic before joining the Canal 13 network in October of 2002.

He was chosen by the public as "Reyes Guachaca" from the newspaper La Cuarta in 2013.

He married Loreto Riveros and together they have four children: Sebastian, Maria, Samuel, and Elisa.

Other journalists also known for their work with the Channel 13 network include Melivep Montes and Fernanda Hansen.

Polo Ramírez Is A Member Of