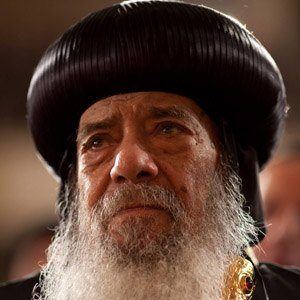 Egyptian religious leader who served as the 117th Pope of Alexandria and the Patriarch of the See of St. Mark from 1971-2012. In 2000 he was awarded the UNESCO-Madanjeet Singh Prize for his promotion of tolerance.

He began his religious life as a monk, taking the name of Father Antonios the Syrian in 1954. Four years later, he became a priest and, upon the March, 1971 death of Pope Cyril VI, he ascended to the papacy of the Coptic Orthodox Church of Alexandria.

He was committed to peaceful dialogue among the different denominations of Christianity, and he was also respected by many Muslim leaders for his conservative views and his dedication to promoting interfaith peace and understanding.

He was born in the Egyptian village of Salaam as the youngest of eight children. Following his mother's death when he was an infant, he was raised primarily by his older brother, Raphael.

Pope Shenouda III was the leader of the Coptic Orthodox Church of Alexandria, a church that was established by Saint Mark during the years when the Roman Emperor, Nero, was in power.

Pope Shenouda III Is A Member Of