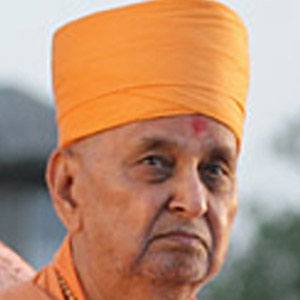 Hindu guru and leader in the international Bochasanwasi Shri Akshar Purushottam Swaminarayan Sanstha (BAPS) organization. Under his leadership, the religious group grew to include more than a million members in numerous countries.

At the age of seventeen, he began his devotion to a religious life and took Hindi monastic vows of nissneh (non-attachment) and nishkam (celibacy).

As President of BAPS -- a position he took at the young age of twenty-nine -- he was a strong advocate of peace and understanding between members of different religions.

He was born in India's Gujarat State, in the small town of Chansad, to religious parents Diwaliben and Motibhai Patel.

He and Swami Vivekananda were both important Indian religious leaders.

Pramukh Swami Maharaj Is A Member Of