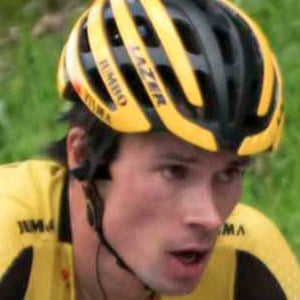 Slovenian racing cyclist who is best recognized for competing with the UCI World Team Jumbo-Visma. He competes in the major Grand Tours including the Tour de France and the Giro d'Italia.

He originally started his career as a Ski Jumper and competed in the Junior World Ski Jumping Championships in 2007. He took up cycling in 2012 and started competing professionally in 2013.

He is known for having placed first overall at the Tour of Slovenia for the first three stages during the 2015 Championships.

He shared a photo with his wife and son to Instagram in September of 2019.

He shared a photo with Italian President Giuseppe Conte to his Instagram in May of 2019.

Primoz Roglic Is A Member Of