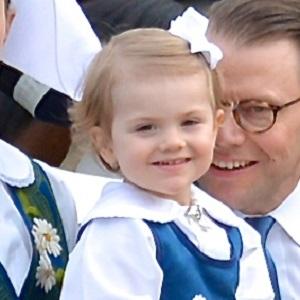 A member of Swedish royalty, she was born to Prince Daniel, Duke of Västergötland and Crown Princess Victoria of Sweden. The granddaughter of King Carl XVI Gustaf, she was born second in line -- after her mother -- to her country's throne.

Attended by several godparents, including her aunt and uncle Prince Carl Philip and Anna Westling Söderström, she was baptized on May 22, 2012 in Stockholm Palace's chapel.

Born Estelle Silvia Ewa Mary, she received the title of Her Royal Highness Princess Estelle of Sweden, Duchess of Östergötland.

In the first two years of her life, she was present at both the wedding of of her aunt, Princess Madeleine, and at the baptism of her cousin, Princess Leonore.

Her mother, Princess Victoria of Sweden, became heir to the throne in 1980, when the Swedish royal succession laws were changed to allow first-born female heirs to supersede later-born male heirs in the royal line.

Princess Estelle Is A Member Of