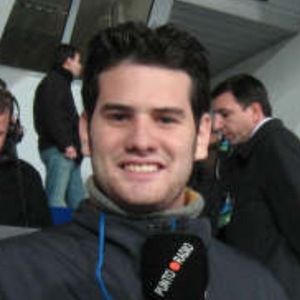 Spanish journalist who is known for his work with the Jugones television program. He is best known for his news and sports coverage and is also known for sharing behind the scenes photos from his interviews to Instagram where he has over 120,000 followers.

He first began his career as a journalist at Matadepera Radio where he presented mainly news programs. He the joined RAC 1 where he began focusing on sports coverage. In January of 2014, he began working with El Chiringuito de Jugones.

He is known for having collaborated with Josep Pedrerol Alonso on the sports program Punto Pelota on Intereconomia TV.

He was born and raised in Sabadell, Catalonia, Spain.

He shared a photo of himself interviewing professional football player Luis Suarez to his Instagram in April of 2018.

Quim Domenech Is A Member Of