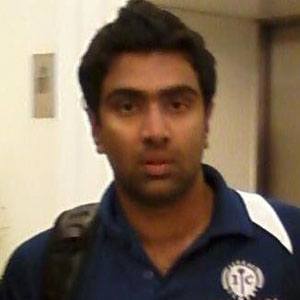 Indian all-rounder who became the fastest Indian bowler to take 50, 100, 150, 200, 250, 300, and 350 Test wickets. He's known for being part of formidable spin attack with Ravindra Jadeja, with the players becoming the first spinners to simultaneously be the top-ranked Test bowlers.

He studied Information Technology at SSN College of Engineering and was nicknamed "Dada."

He became the third Indian off-spinner to take 25-plus wickets in a series during the Gavaskar Trophy in 2013. Also handy with the bat, he's maintained a Test average over 30.

He married his childhood friend Prithi Narayanan in 2011.

He represented India in the 2011 ICC Cricket World Cup along with Harbhajan Singh.

Ravichandran Ashwin Is A Member Of