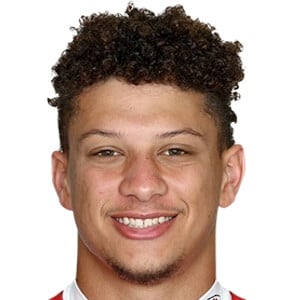 NFL quarterback who was selected 10th overall in the 2017 NFL Draft by the Kansas City Chiefs. He was named NFL MVP after throwing for over 5,000 yards and 50 touchdowns in 2018. The following year, he was named Super Bowl MVP after leading the Chiefs to victory in Super Bowl LIV.

He played football, basketball and baseball at Whitehouse High School. He once threw a 16 strikeout no-hitter in senior year. He was the Maxpreps Male Athlete of the Year for 2013-2014. He was drafted by the Detroit Tigers in the 37th round of the 2014 MLB Draft, but did not sign.

He was a Sammy Baugh Trophy recipient in 2016 as the quarterback of the Texas Tech Red Raiders. He set the NCAA record for single-game yards of total offense with 819 in 2016, and tied a single-game passing yardage record that same game with 734.

His father Pat Mahomes played in the MLB from 1992 to 2003. He has a sister named Mia and a brother named Jackson. He began dating his longtime girlfriend Brittany Matthews during his sophomore year of high school. The two got engaged in 2020 and they welcomed their first child together, a daughter named Sterling Skye Mahomes, on February 20, 2021. The couple was married in March 2022.

He was coached by Kliff Kingsbury as a member of the Texas Tech Red Raiders.

Patrick Mahomes II Is A Member Of