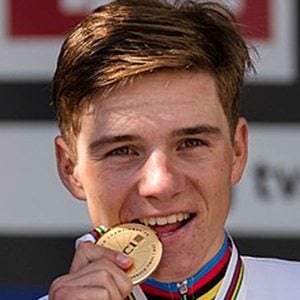 Belgian cyclist who is best recognized for his riding with the UCI World Team Deceuninck-Quick-Step. He is known for having won both the Time Trial as well as the Road Race at the UCI Junior Road World Championships.

Initially starting his sports career as a football player for the Anderlecht and PSV Eindhoven clubs, he started cycling in 2017. He quickly gained attention in the sport when he won the Time Trial and Road Race at the 2018 European Junior Road Cycling Championships.

During his debut for the Deceuninck-Quick-Step team at the Vuelta a San Juan race, he won both the Young Rider Classification and the stage 3 Time Trial, earning his first professional podium.

He was born and raised in Schepdaal, Flanders, Belgium and is the son of fellow professional cyclist Patrick Evenepoel.

As a member of the Deceuninck-Quick-Step team, he often competes alongside fellow team member Julian Alaphilippe.

Remco Evenepoel Is A Member Of