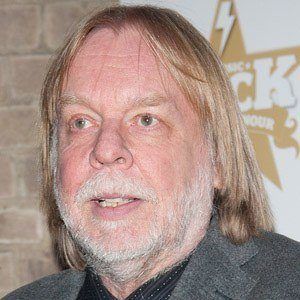 Keyboard player known for his many stints with the progressive rock band Yes between 1971 and 2004.

He left his studies at the Royal College of Music in favor of session music work. He was featured on songs with Cat Stevens, Ozzy Osbourne, and David Bowie.

His best-known records from his solo career included The Six Wives of Henry VIII from 1973, Journey to the Centre of the Earth from 1974, and The Myths and Legends of King Arthur and the Knights of the Round Table from 1975.

He was married four times: first to Roz Woolford in 1970, then to Danielle Corminboeuf in 1980, to Nina Carter on November 10, 1984, and to Rachel Kaufman in 2009. His sons, Adam and Oliver, both became keyboardists.

He played on many of Ozzy Osbourne's popular songs.

Rick Wakeman Is A Member Of