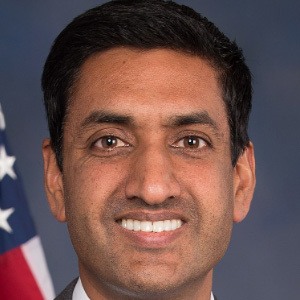 Politician and lawyer who began serving as the U.S. Representative from California's 17th congressional district in 2017. He became a national co-chair of the 2020 presidential campaign of Senator Bernie Sanders.

He earned his bachelor's degree in economics from the University of Chicago and received his JD from Yale Law School.

He considers himself a progressive capitalist and does not take campaign contributions from corporations or political action committees.

His father is a chemical engineer and his mother is a former teacher. He married his wife Ritu in 2015. They have children named Zara and Soren.

He worked as the Deputy Assistant Secretary in the United States Department of Commerce under President Barack Obama.

Ro Khanna Is A Member Of