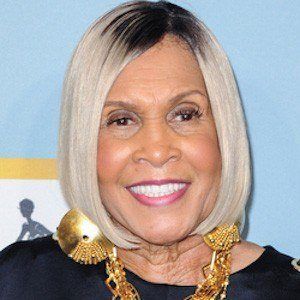 Former background singer for Ike & Tina Turner as a member of The Ikettes who would later become the restaurateur of Sweetie Pies and star of the Oprah Winfrey Network reality show Welcome to Sweetie Pies.

She sang in church choir and participated in local talent contents growing up. She would drop out of school to pursue music full time in 1958.

Her first venture into the restaurant business was her 1970 establishment called Wings and Things. Her singing career came to an end in 1979 due to a lung condition, leading her to become a dialysis technician before opening up Sweetie Pies.

She was the oldest of nine children. She spent her early years in Mississippi before moving to St. Louis, MO with her family. She opened Sweetue Pies with her son Tim Norman.

She performed as an "Artette" with Art Lassiter, as a "Night Tripper" with Dr. John, and did session work with Stevie Wonder, Barbra Streisand, Joe Cocker, and the Rolling Stones

Robbie Montgomery Is A Member Of