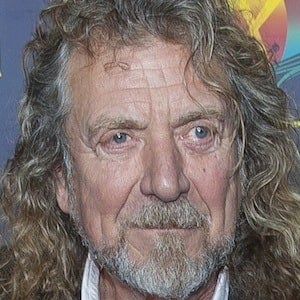 Iconic rock star who gained fame as the vocalist and songwriter of the classic rock band Led Zeppelin, known for such hits as "Stairway to Heaven" and "When the Levee Breaks." He was named the #1 Lead Singer of All Time by Rolling Stone Magazine in 2011.

He quit his training as a chartered accountant in order to immerse himself in the England Midlands blues scene.

After Led Zeppelin broke up in 1980, he began working as a solo artist. In 2007, he released a critically acclaimed duet album with bluegrass singer Alison Krauss called Raising Sand.

He married Maureen Wilson on November 9, 1969 and divorced her in August 1983. He has four children named Carmen Jane, Karac Pendragon, Logan Romero and Jesse Lee.

He was joined by Jimmy Page, John Paul Jones and John Bonham in Led Zeppelin.

Robert Plant Is A Member Of