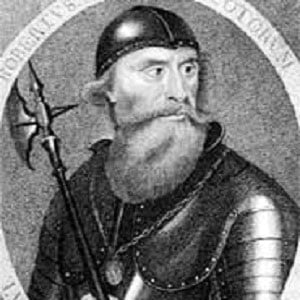 From the early 1300s until his demise at the age of fifty-four, Robert I held the title of King of Scots. Better known as Robert the Bruce, he was an accomplished soldier and a key figure in the Wars of Scottish Independence.

When he was in his early twenties, he likely assisted his father in defending Carlisle, Scotland, against a sudden attack.

He was responsible for the 1306 murder of his political foe John III Comyn, Lord of Badenoch.

With his first wife, Isabella of Mar, Robert the Bruce had a daughter named Marjory. His second marriage, to Elizabeth de Burgh, produced four children, including the future King David II of Scotland. He also had at least six illegitimate children.

He was portrayed by Scottish actor Angus MacFadyen in the 1995 film Braveheart.

Robert the Bruce Is A Member Of