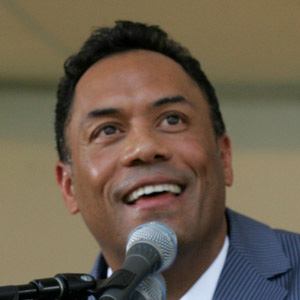 Twelve-time All-Star second baseman who helped guide the Toronto Blue Jays to back-to-back World Series titles in 1992 and 1993; inducted into the baseball Hall of Fame in 2011.

He was a star baseball player in Puerto Rico before being drafted by the San Diego Padres at the age of seventeen.

He helped lead the Baltimore Orioles to the ALCS in 1996 and 1997 but they were unable to advance to the World Series either year.

He married Kim Perks in 2012 and he has a son named Robertito. His father was also a second baseman for fifteen years in the majors.

His brother, Sandy Alomar, was a longtime MLB catcher.

Roberto Alomar Is A Member Of