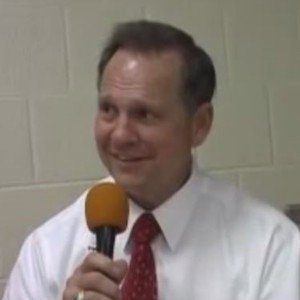 Widely known as the founder and chairman of the Foundation for Moral Law. Twice elected as the Chief Justice of the Alabama Supreme Court, he resigned in April 2017 to fill Jeff Sessions' vacated Senate seat in Alabama as a conservative Republican candidate.

He graduated from the US Military Academy at West Point in 1969 with his B.S. degree. He would later earn his law degree from the University of Alabama Law School after being discharged from the US Army.

In 2003, he was removed from his Chief Justice of the Supreme Court of Alabama office after refusing to remove a Ten Commandments monument outside of a federal building. He served his second term as Chief Justice between 2013-2017.

He has four younger siblings. He and his wife Kayla share four children.

He became a leading voice of the birther movement during Barack Obama's two-term presidency.

Roy Moore Is A Member Of