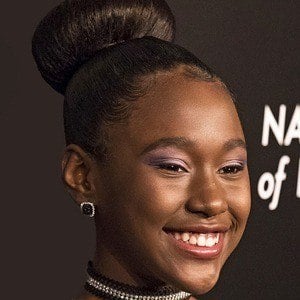 Up-and-coming actress who made a name for herself playing Toni in the critically acclaimed 2016 drama The Fits. She then joined the cast of the Justin Long drama And Then I Go.

A performer from an early age, she managed to finagle her way onto her older sister's dance team, Q-Kidz, at the age of six. As a member of the team, she was one of 45 children recruited for The Fits.

She was discovered through her dance performances on the Q-Kidz YouTube channel.

She has an older sister, Yrmajesti, and a younger brother, King. Her mother's name is Charyce Harris.

She is joined in the cast of And Then I Go by Melanie Lynskey, Tony Hale, and Carrie Preston.

Royalty Hightower Is A Member Of