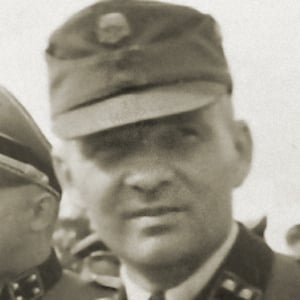 Notorious Nazi who served as the commandant of the Auschwitz concentration camp, where millions of Jews were killed on his watch. He was ultimately hanged to death for his crimes in 1947.

He grew up in a strict Catholic household and served at a military hospital during World War I.

His handwritten confession is displayed at the United States Holocaust Memorial Museum in Washington, DC.

He married Hedwig Hensel in 1929 and had children named Ingebrigitt, Klaus, Hans-Rudolf, Heidetraut and Annegret.

He oversaw the murders carried about by the likes of Josef Mengele at Auschwitz.

Rudolf Hoss Is A Member Of