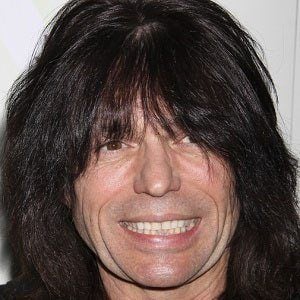 He recorded Speak of the Devil, his first album with Ozzy Osbourne, in 1982. Metal Health, his debut recording with Quiet Riot, was released the following year.

His memoir Off the Rails discusses his friendship with Ozzy Osbourne's guitarist Randy Rhoads, who tragically died in a plane crash in the early 1980s.

Born Rodolfo Maximiliano Sarzo Lavieille Grande Ruiz Payret y Chaumont, he spent the first decade of his life in Havana, Cuba, and the remainder of his childhood in Florida, U.S.A. He is the older brother of heavy metal guitarist Robert Sarzo.

He and drummer Tommy Aldridge both contributed to M.A.R.S.'s 1986 album Project: Driver.

Rudy Sarzo Is A Member Of