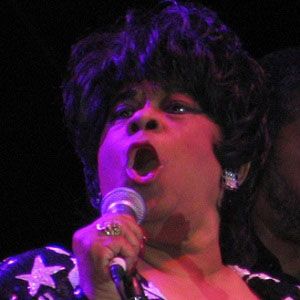 Remembered for her R&B hits "Teardrops from My Eyes," "Mambo Baby," "Lucky Lips," "Oh What a Dream," and "(Mama) He Treats Your Daughter Mean," she is also notable for her Tony-winning performance in the Broadway show Black and Blue, as well as for her contributions to the musical's Grammy-winning cast recording.

Early in her career, she performed with both Lucky Millinder and Duke Ellington.

Her musicians' royalties and rights advocacy resulted in the creation of the Rhythm and Blues Foundation.

She and her six younger siblings grew up in Portsmouth, Virginia. She was married three times -- to Jimmy Brown (whom she later discovered was already married), Earl Swanson, and Bill Blunt -- and she raised two sons.

Ruth Brown Is A Member Of