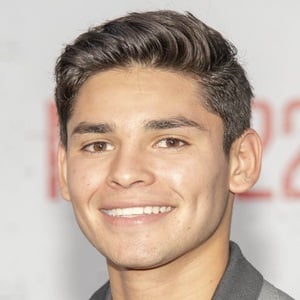 Undefeated professional boxer known for beating most of his opponents within the first two rounds by knockout. He signed with Golden Boy Promotions in 2016 and became a sponsored athlete for Gymshark. He won the WBC Silver lightweight title after defeating Romero Duno in September 2019.

He began boxing at the age of seven in his family's garage and he'd become a 15-time national champion in his career as an amateur boxer.

In 2014, he was a National Junior Olympics Silver Medalist. In 2017, he earned the fastest knockout of his professional career by defeating Miguel Carrizoza in 30 seconds. In 2019, he was cast as a lead in a Brat web series.

He was born in Victorville, California and he's of Mexican descent. His parents' names are Henry and Lisa García. He grew up with four sisters and a brother named Sean who's also a professional boxer. In March 2019, he welcomed a daughter named Rylie Garcia with Catherine Gámez.  In December 2020, he had another daughter, Bela, with his former partner Drea Célina.

In September 2020, he performed the Body Shot Challenge with Dixie D'Amelio and Addison Rae on his kingrygarcia TikTok account.

Ryan Garcia Is A Member Of