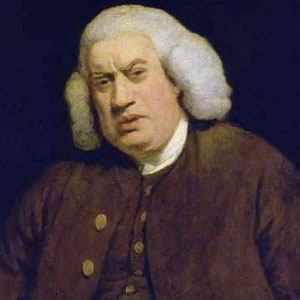 Remembered for his biographies, literary criticism, essays, reference works, and poems, this significant eighteenth-century English writer is most well known for his 1755 work A Dictionary of the English Language and his 1765 annotated version of The Plays of William Shakespeare.

After briefly studying at Pembroke College, Oxford, he began writing for a London publication called The Gentleman's Magazine. His early literary works include a play titled Irene and a biographical work called Life of Mr. Richard Savage.

His well-documented repertoire of physical tics has led modern physicians to believe that the writer suffered from Tourette syndrome.

The son of Sarah Ford and bookseller Michael Johnson, he spent his youth in Lichfield, Staffordshire, England. In 1735, he married Elizabeth "Tetty" Jervis Porter, a widow twenty years his senior.

He is the subject of Scottish author James Boswell's acclaimed 1791 biography The Life of Samuel Johnson.

Samuel Johnson Is A Member Of