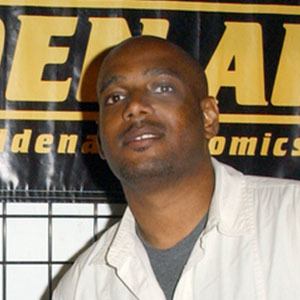 Comic book artist who has contributed to Marvel, DC, and Dark Horse Comics. He has illustrated for Marvel's Power Man and Iron Fist series, and DC's Justice League Unlimited.

He began drawing around age 8. He graduated with his degree from Sanford College.

He did artistic design work on the popular 2008 comic film The Dark Knight. He created the popular Bitter Root comic series for Image Comics, which debuted in November 2018.

He was originally born and raised in Greeleyville, South Carolina.

He collaborated with Method Man on his 2008 Method Man comic series as the main artist.

Sanford Greene Is A Member Of